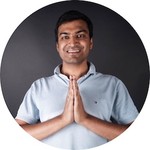 How [email protected] Renewed My Faith in the Future of Work

In a single conference, I saw what the future of work looks like, and we should all be very, very excited. 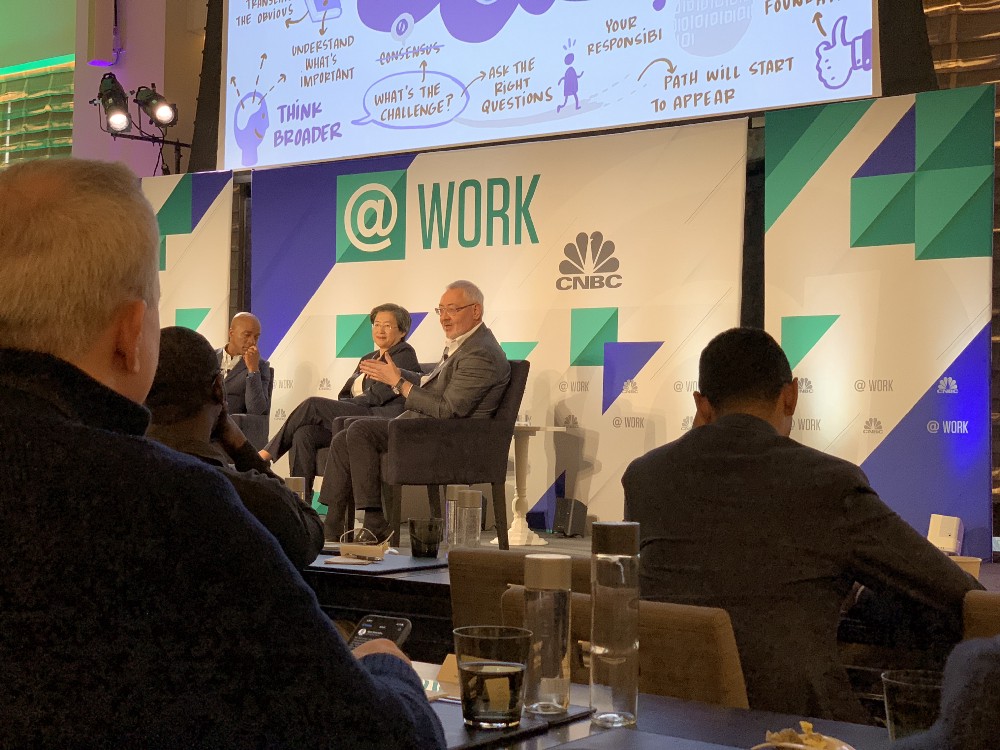 On Oct 31, I attended a conference in New York City, and it changed the way I think about the future of work.

To give some context, I’ve been living and breathing the future of work concept for the last three years — I’m the founder and CEO of Indiez, a company dedicated to future of work principles.

I’ve attended and spoken at many conferences in the past, but this conference was unlike any I’ve been to before. Considering the topic was the #futureofwork movement, I was excited to be a part of it. I can talk about that topic literally for hours.

Making it even better, some of my favorite people were in attendance, including:

And plenty of other superstars shaping the future of work.

Listening to those incredible speakers made an amazing impact on me and my views on this movement. I called my team members immediately after the conference to change our strategies. We had work to do.

Now, if you aren’t familiar with the #futureofwork concept, you aren’t alone. But that doesn’t mean it’s not happening, or that it won’t influence your own job in the very near future. 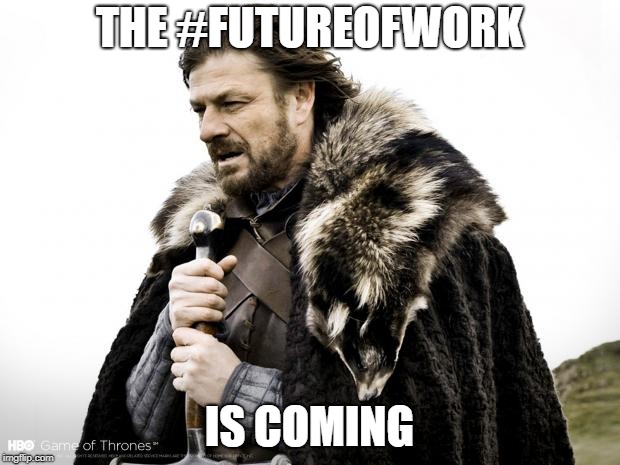 This is precisely why CNBC began its new @Work content series that includes articles, TV spots, and conferences developed to educate as many as possible on the blitzkrieg that’s heading toward them. The better prepared our CXOs are for these sweeping changes, the more innovative they can be in applying these revolutionary new principles to their own workplaces.

So thanks to these visionaries, I learned these three stats that should prove to everyone that the future of work isn’t actually the future. It’s happening as I write this.

Even the biggest names struggle to hire top talent 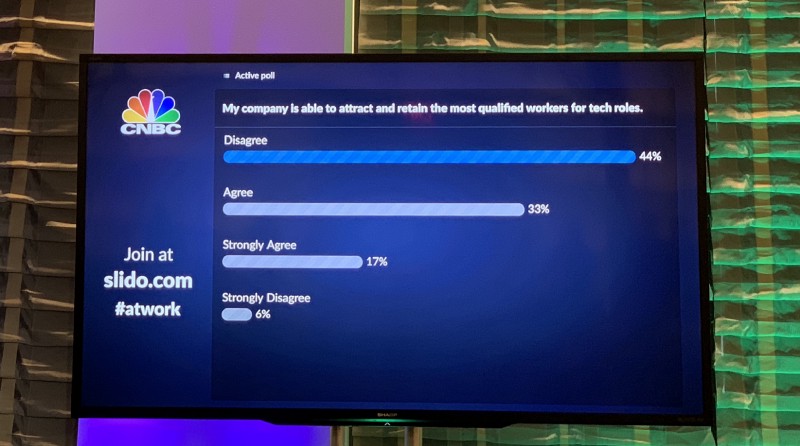 44% of senior executives who attended the conference say they don’t feel their company is able to attract and retain the most qualified workers for their needed tech roles. 44%!

Now, this comes as an overwhelming number of attendees also stated that they want and need digital innovation in their company, but are having a hard time finding the right talent.

Moreover, it seemed that enterprises really are having a hard time trusting non-employee workers. This distrust comes despite the fact that the number of independent professionals around the world has been surging for over a decade, and it’s quickly becoming top tech talent’s preferred method of work (more on that later). 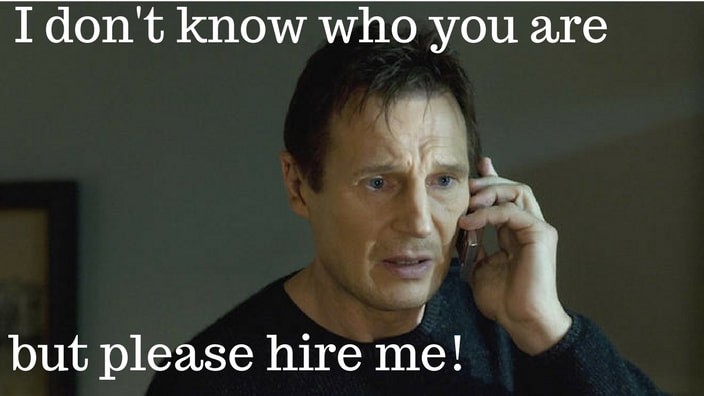 So let’s break this down.

– Nearly half of the executives at the conference can’t attract and retain top tech talent.

– All of them are craving further, deeper, wilder, creativ-er digital innovation.

– Many of them still don’t trust freelancers.

– Top tech talent around the world is increasingly opting for project-based, freelance work.

It seems there’s a profound disconnect here that comes down to a lack of trust. If there were more trust between freelancers and companies, these CXOs could potentially mitigate the issues they’re having in finding and retaining top talent.

That’s where #futureofwork comes into play. Whether it’s machine learning operations that match freelancers and companies to lower the risk of failure, trustless blockchain programs that incentivize both the freelancer and the company equally, or any other form of breakthrough tech, we’ll soon be able to solve this freelancer distrust issue.

While focusing on a horizon of two years offers agility to grow and change with trends in tech, it can also assure you a spot as an eternal follower rather than a leader. Here are two quick examples that show the value of forward-thinking.

Starbucks. Below is a snapshot of Starbucks’ above-the-fold homepage in 2008 (No, they’re not annoying banner ads). And then another from just the other day. 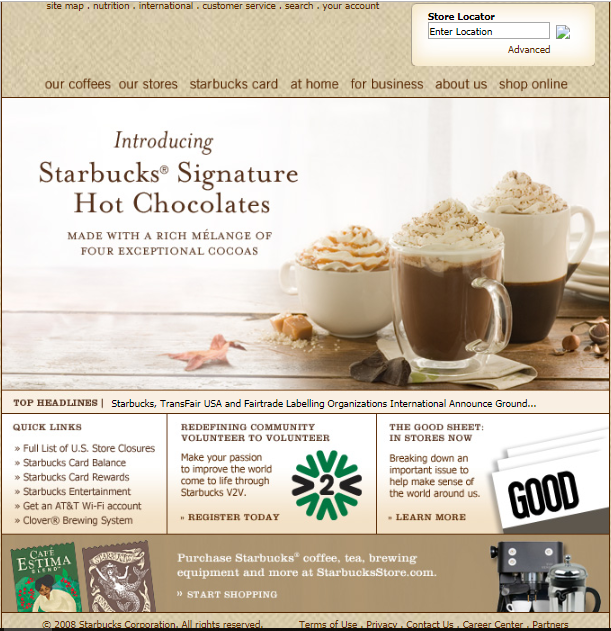 Notice the stark difference in web design, user experience, branding, offerings, etc. Starbucks has always been strong in this department, changing up their online presence and tech offerings when they start to get stale. While they likely had no idea what their website was going to look like 10 years into the future, they knew there would be several iterations within that time frame.

Twitter. 10 years ago, Twitter had 6 million users. By 2017, this grew more than 5,000% to 328 million users. Imagine if you’d had the foresight to build the right tools and campaigns to maximize your Twitter presence across an entire decade.

And now we have the emerging technologies listed previously (blockchain, machine learning, etc.) that are truly in their infancy. However, because of our sad attention spans these days — and the overwhelming power of Amara’s Law — finding valuable applications for these breakthroughs tends to take a backseat to short-term solutions. 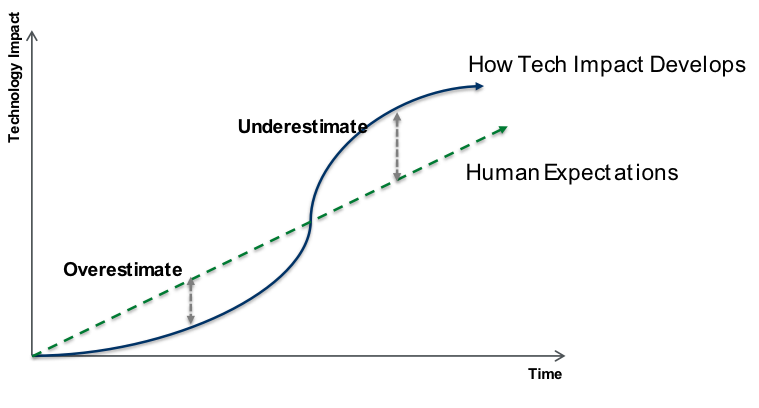 The billion dollar companies of 2030 are making bold decisions NOW and learning how to scale these technologies — not waiting for others to pave the way for them.

94% of all jobs added since 2005 are in “alternative arrangements.” I’m gonna say that again.

94% of all jobs added since 2005 are in “alternative arrangements.”

And of course “alternative arrangements” is corporate speak for freelancers and contractors who either work part-time, full-time, on a project-by-project basis, or any other form of employment that veers away from a 9–5 office job.

Harking back to earlier, what this tells me is that there is a Pacific Ocean-sized pool of top talent that is being criminally underutilized by companies adhering strictly to traditional workplace practices. And yes, this pool is filled with techies who are up for the challenge of changing the world. 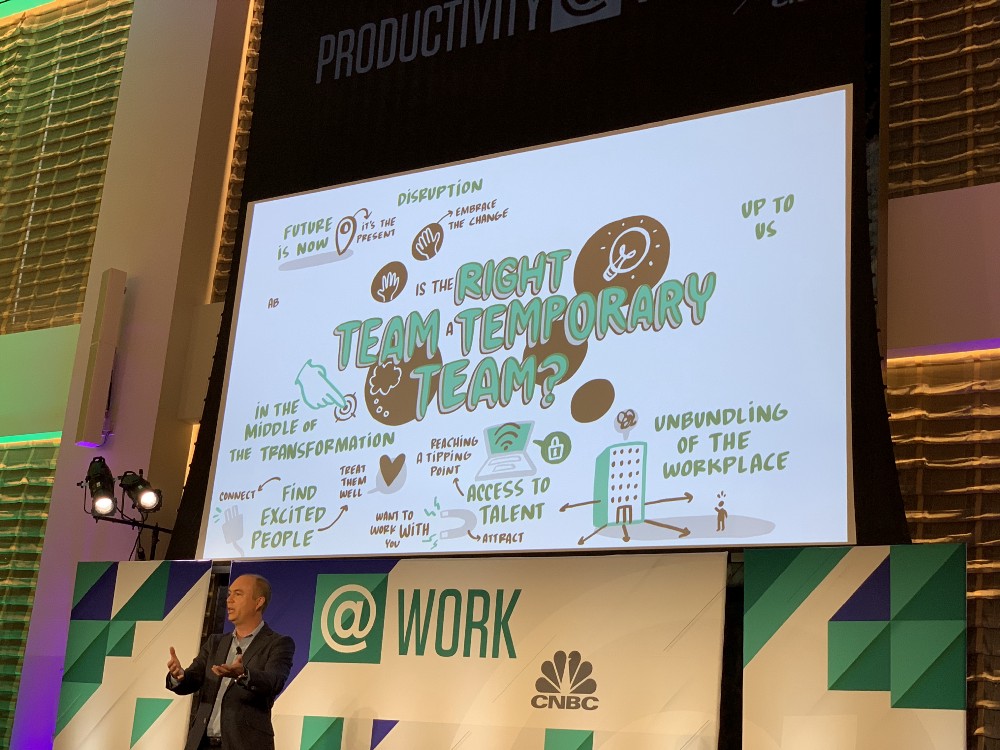 There were two central tenets of the conference, and both go along with this statistic.

If businesses could just take a leap of faith and plaster these words on their walls, they may start to fix the issue of trust between talent and companies.

I held onto these principles when starting Indiez, and I’ve since successfully built a 100% remote company. (You can read about that process here.) It’s entirely possible — you just have to put the proper measures in place, and commit to it.

To bring it all home, here’s what I believe the biggest takeaways from the conference are, based on the above statistics.

– The tech talent companies need to build the future isn’t sitting around in Silicon Valley or New York City. They’re exploring the beaches of Vietnam. They’re sitting in a coffee shop in Singapore. They’re picking up the ukulele as a hobby in New Zealand. And they’re willing to help you future proof your business if you trust them.

– While we’ll never know exactly what the next decade holds for tech innovation, companies need to think long-term as well as short-term, or else risk falling behind those who are daring and bold with their tech vision.

– The future of work is here, but as is so often the case, only a fraction of businesses are going to realize that, and they’re the ones who will pave the way for others.

I can’t stress this enough. This conference changed how I think about so many things. Not only what the future of work holds, but how I can use my understanding of these changes to keep Indiez at the forefront of innovation.

But the best part is how applicable these lessons learned are for any industry, not just tech. In fact, it opens up entire new worlds for non-tech companies to be themselves innovators in the tech sphere, all thanks to access to the best tech talent on the planet. They’re out there, waiting to bring your ideas to life. You just have to connect with them.

To learn more about the #futureofwork, check out CNBC’s @Work page here, or any of our other blogs here.